Roy Hodgson has brought character back to a side that lacked it. Here's Robert Sutherland with a look at what has changed. Fighting adversity collectively builds a unitary strength among teams, bringing friendships and camaraderie to the forefront. The Crystal Palace of Roy Hodgson are a team - a unit ready to go to battle - freed from the shackles of individualism and personal glory.

It wasn't always like this. When you rid a team of leaders, you lose that glue. That cohesion which you work so hard to concoct can be so easily dissolved by removing those binding elements. Naivety can lead you to believe that the cohesive quality of a team is just a byproduct of tactics - but it gives an unquantifiable quality to a team's performance. You can't measure the contribution that it has, but you can see it. In performances. In belief. In the way players defend and stand up for each other.

When Frank de Boer determined that Luka Milivojevic would be better suited to a defensive role, and then dropped him from the team entirely, it appeared to suck the spirit out of the side. Players who had worked with such determination under Sam Allardyce just months before looked listless; lacking in leadership and lacking in unity. Wilfried Zaha, Palace's most important player, wasn't protected in the opening game against Huddersfield Town. Not just by the referee but by his own players -- instead, Zaha was given rough treatment and the players standing by his side allowed it to happen. Teams with a strong spirit work for each other but also defend one another. 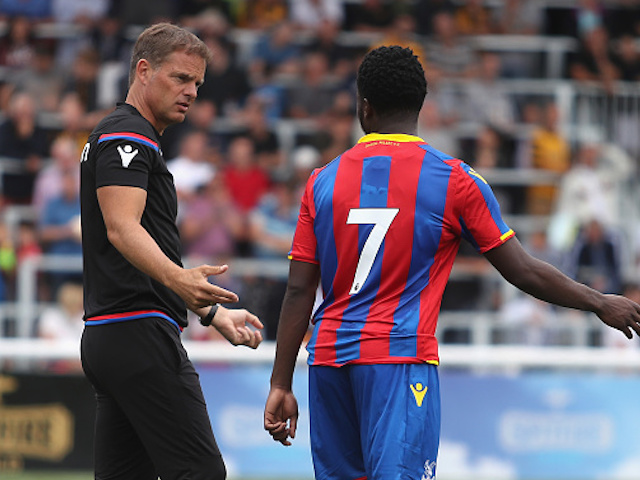 When Alan Pardew ostracised Mile Jedinak, he didn't just rid the team of a defensive midfielder when it needed one, but he moved on a captain that lead by example, set standards, encouraged and invigorated teammates to run through walls that stood in the club's way. Promotion. Premier League safety. Cup runs. All of these things were achieved not just through tactics (because good management is the ultimate key to success) but through the building of bonds between players who otherwise would have had little in common. You don't just achieve by picking the best players, you do it by empowering all the players you have to contribute to each other - to the greater good.

It's where Roy Hodgson has excelled so valiantly. There aren't favourite players. There's a squad, and each of those players has a part to play. The players don't just work for themselves -- they work for each other.

This season hasn't just been one of a seven-game losing start. It's been one of injury-induced adversity that saw the side struggle through one of the busiest spells of the football calendar with, at times, just 12 recognised first-team players. Palace played matches without a striker. Without their best player. With barely a first-team centre-back to call upon. Those players who were fit were asked to play through exhaustion and minor injuries. It's this kind of challenge that builds strength. The players fighting on the pitch weren't just doing it for themselves, they were fighting for those who were injured.

One such player, Bakary Sako, so often maligned by previous managers and supporters, was brought into the fold and given the encouragement to make his mark. A player who kept being ignored suddenly started taking chances. His teammates responded. No longer was he just Sako the winger who couldn't make an impact, but he became Sako the goalscorer. Adversity comes in many shapes and sizes. But if you build a team spirit, a sense of overcoming the impossible can set in. James Tomkins, so frequently sidelined with niggly injuries, has formed a formidable partnership with Mamadou Sakho -- and every clean sheet they shield the club towards helps to foster that bond between the players. It makes those minor injuries insignificant.

That collective spirit makes players accountable to each other, too. There were times under Pardew and De Boer that, in scenarios where players might be expected to throw themselves in front of the ball, didn't do so. Recent results have come as a consequence of exactly those kind of instances. You don't win games as individuals, you win them as a team.

Much has been said about Zaha's success this year; plenty of it in the same breath as comments about Palace being a one-man team because of his contribution to the side. Zaha is a core reason as to why Palace are playing Premier League football next season; but the team that stood behind him and enabled him to succeed deserve credit too. Zaha's success comes because other players are willing to put their bodies on the line. Willing to make space for him. Willing to stand up to his aggressors. Team spirit is an all-encompassing thing. A team without it can wilt; it can look upon adversity as something destructive, rather than something enriching. Hodgson took the team by the scruff of the neck, drilled them into defending collectively, and fostered a team spirit that powered Palace to safety with games remaining. Seven defeats and multiple injuries weren't show-stoppers -- they were obstacles to overcome. Hodgson's team did that, with care for one another and an indomitable attitude.