Crystal Palace's U15 side secured a brilliant win over Wigan Athletic in the Floodlit Cup, and Matt Woosnam has the details for us. 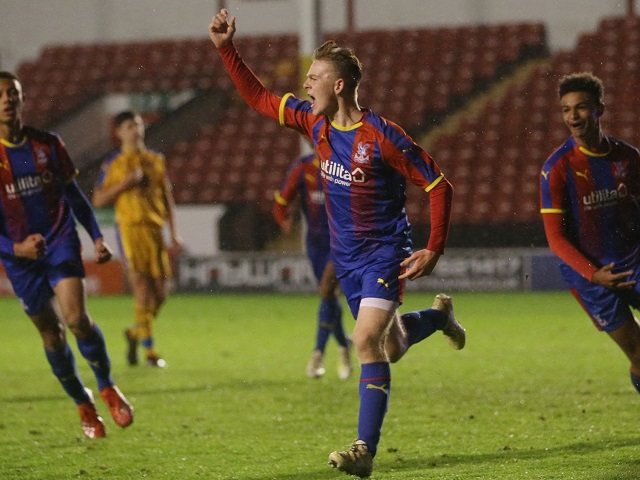 How good does that sound? A pipe dream you might say, you would be right. But Palace’s Under 15s can legitimately claim to be the champions of England. They are the best U15 team in the country by the only real measurement possible.

That is the knockout tournament that is the Floodlit Cup. A competition designed under the often (unfairly) maligned Elite Player Performance Plan (EPPP). The transformation of youth football in England has its problems, not least the structure of compensation and power it gives to clubs over children under 16, but there are some significant advancements as a result.

The Premier League games programme is the main example of that, and the Floodlit Cup forms a part of the programme, with a qualifying round, then a round-robin group stage, before the knockout stages of the tournament.

Palace’s U15s triumphed in a tournament designed - as the name suggests - largely to be played under Floodlights at first-team stadia.

They have been superb throughout, but in defeating Chelsea 3-0 in the Regional final, thanks to two outstanding Victor Akinwale goals and a close range Fionn Mooney finish, they showed why there is genuine excitement about this group of players.

The essential caveats are thus: firstly; these are teenagers who still have a lot of emotional and physical development to go through which will undoubtedly affect their footballing ability - either positively or negatively, and secondly; the chance of even a single one of these players making a senior debut at the club, or in the Premier League, is slim.

That said, it would be unfair not to recognise their achievements in being crowned Premier League U15 Super Floodlit Cup winners.

Led throughout by their attacking players, Akinwale is quick, strong and his hold-up play is a key component of his game as a centre-forward. But he is fed by the likes of Fionn Mooney, a diminutive no10 who scores goals in abundance, finishing top scorer in the competition with 11 goals, and 28 in all competitions this campaign. Jadan Raymond, a clever, exciting midfielder who can play centrally or wide, captained the side in defender Ryan Bartley’s absence at Chelsea. The 15-year-old’s skill is encapsulated by close control and a direct running style. Like Mooney, his vision is outstanding.

It is the understanding that these two youth internationals (Ireland, England and Wales respectively) have when playing together that stands out even more, as well as their clear mental strength. After Akinwale was brought down inside the penalty area, there were several minutes before Mooney could take the penalty, and Wigan’s players were in his ear. But he was not fazed and tucked it home cool as you like to make it 2-2. Under-14 Zion Atta, for whom Palace paid a five figure compensation fee to Millwall earlier this season, dramatically netted a stoppage time winner with a brilliant finish from a narrow angle.

Most Palace fans would associate marauding wing play with the club, but under Darren Powell’s tutelage it is a diamond formation with inside forwards who look to thread balls into gaps through the middle that tends to be the primary tactic. That is not to say that wingers do not come into play, they certainly do.

Attacking players tend to be appreciated more than those in more defensive positions, but the performances of Kanye Jobson in a holding role have not gone unnoticed, neither has that of Jack Wells-Morrison who nodded in a crucial 1st equaliser early in the second half. Bartley, a centre-back who is often also used at right-back, and has, like Raymond, made an U18 appearance this season, is tall, strong and good on the ball. Recognition has arrived in the form of an England training camp call-up.

Fellow defenders Joe Sheridan, Cameron Brown and Tayo Adaramola have also excelled during the tournament. Sheridan, an equally adept cricketer who plays for Surrey may find he has a decision to make soon as to which sport he sees his career in.

It was a surging run down the left wing from Adaramola and cross which saw Akinwale finish a fine move to put the Eagles ahead against a full-strength Chelsea last time out.

In goal Joe Whitworth missed out on this game due to playing in a tournament in Italy for England, but he is highly-rated by the club, and evidently, his country. But Owen Goodman, also thought of highly, made two stunning saves in a strong performance, tipping one over the bar before a remarkably reflex save from close range.

To get this far, Palace comfortably defeated Arsenal and Chelsea. There could be no suggestions of a perceived ‘easy’ route to the trophy.

International recognition has arrived for: Goodman, Whitworth, Rodney, Bartley, Mooney and Raymond. It is a strong cohort. In fact, it is probably the best year group Palace have ever had.

It is important to look at this in context, however. They are young, they will face many challenges in years to come, they will not always play together, some may find they have already peaked, some may find their peak in the future. There is only so much you can predict about such young players, and to demand definitive answers is foolish and harmful. Likewise is to herald any of these players as the supposed ‘next big thing’.

Appreciate their talent, but most of all, let them grow without unnecessary external pressures.