Walking in A Palace Wonderland - The FYP Marathon March 2020 Diary

We took part in the fourth Palace For Life Marathon March this weekend and had a blast. Julian Chenery talks us through the day... 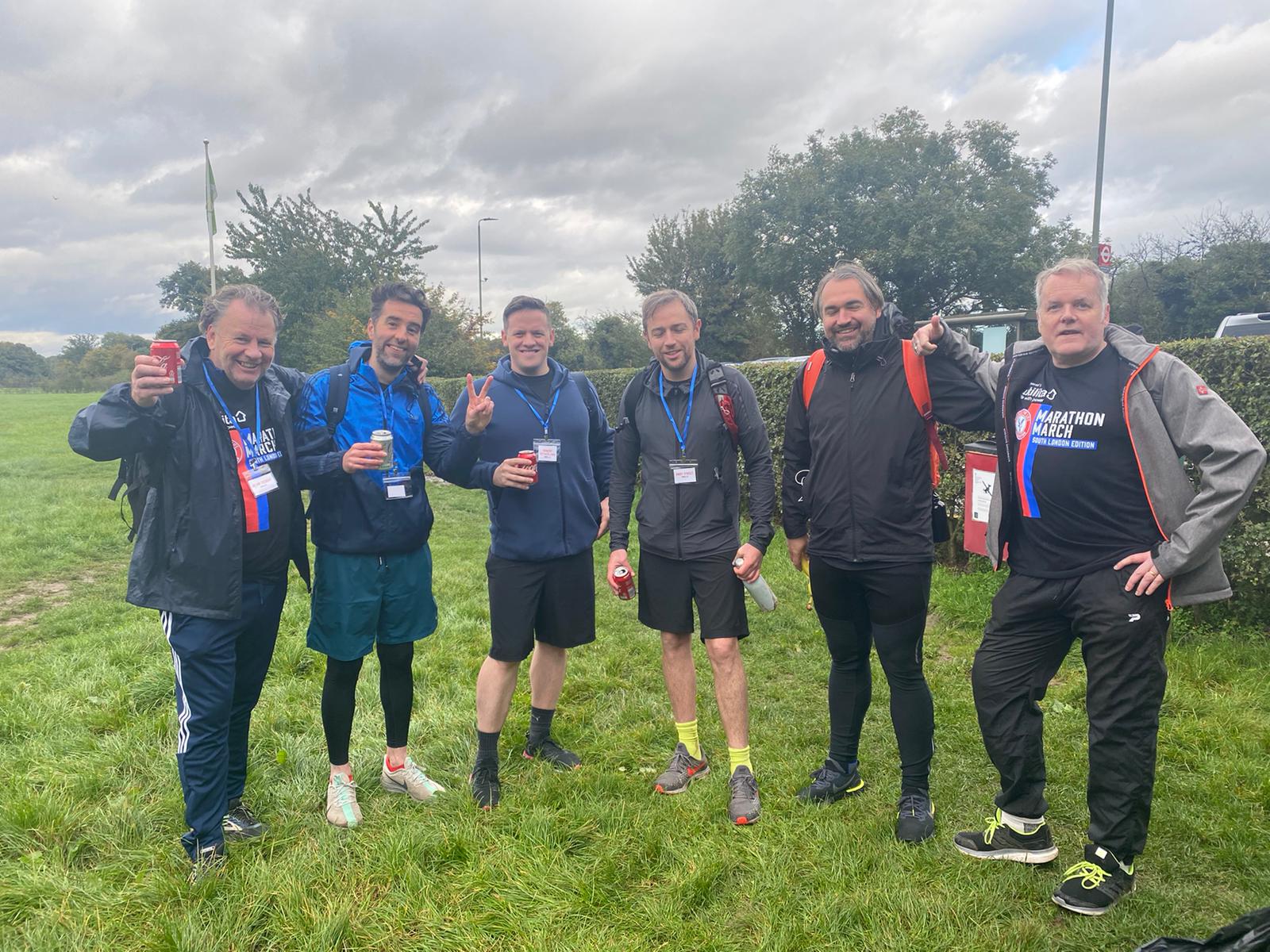 The Adventurers assembled at 7.15am in SE25. Selhurst Park car park was cold but a beautifully-clear sky awaited the six members of the FYP bubble of walkers. The intrepid JD (captain and team-leader), Andy Street (lawyer), Rob Sutherland (tweeter), Kevin Day (author), Jesse Boyce (making his debut) and JC (Legend).

This is a tale of how six Palace fans straggled 26.2 miles* around South London to support the Palace for Life Foundation on its fourth Marathon March and raised a fair amount of dosh on the way.  (* due to navigational errors the total distance covered was in fact 27.4 miles!).

Bubble 21 entered the stadium via the Wright & Bright check-in lounge. Our first problem being that Kevin and JC didn’t/couldn’t pass the temperature check. Not for being too Covidly-hot but for being too car-parkingly cold! It took a dozen attempts each – including some jogging to reception and back – to warm us up to the required minimum temperature of 34 degrees. Never believe anyone who tells you Kevin is warm-hearted!
Checked-in, breakfasted, stretched and ready, we lined up on the starting grid next to the Fan Zone behind bubble 20 and in front of Bubble 22.

Bubble 20 set off and we waited, wary that Bubble 22 (Derry, Bright and Izzard) were already eyeing-up as to when they would overtake us. Suddenly it was 8am and we were off into the streets and park and hills of South East London. We’ve set up in a 3-3 formation. This will later move to a 2-2-2 and eventually a 1-1-1-1-1-1. 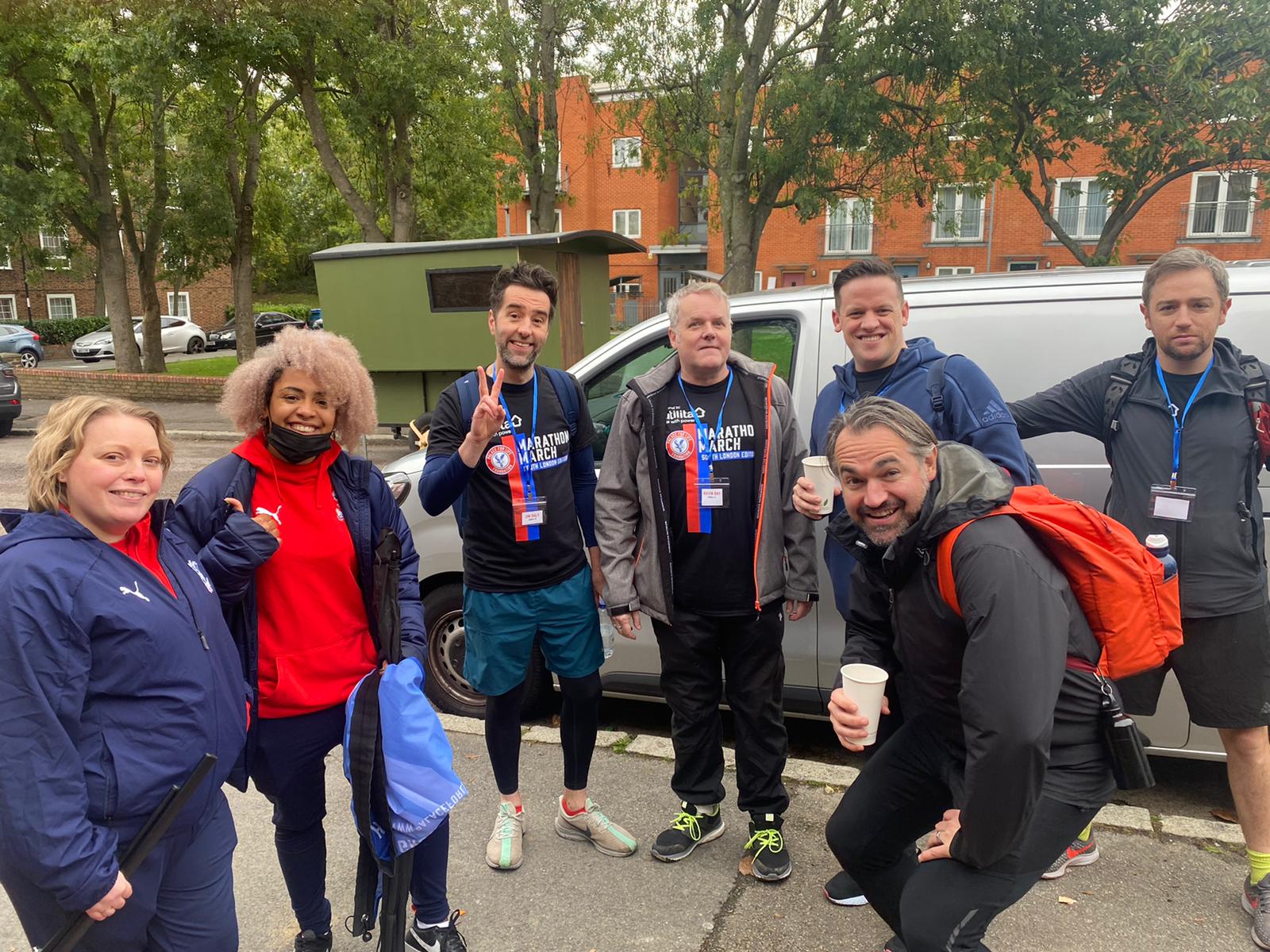 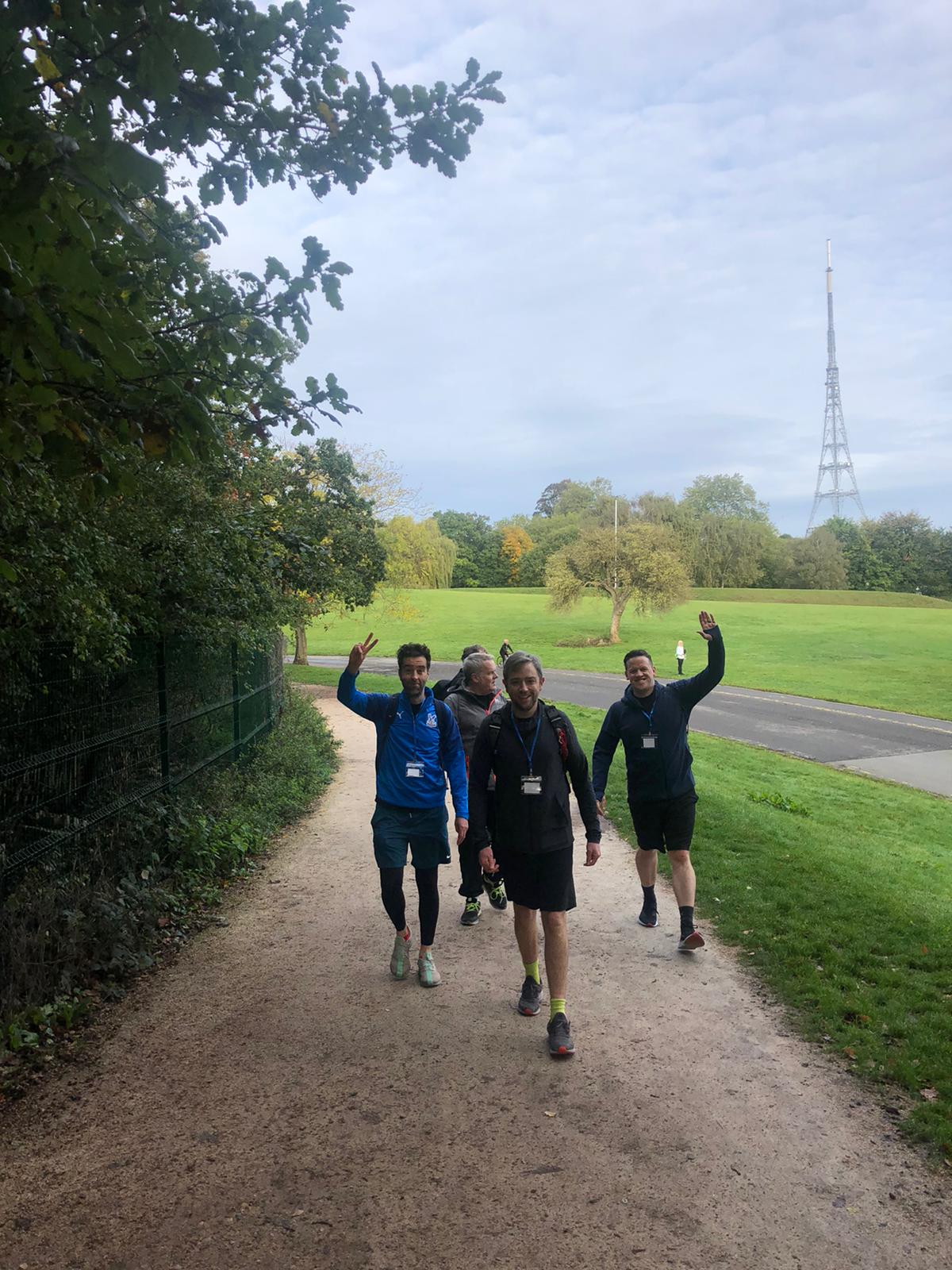 We’ve elected Streety as navigator as he had a charged-up phone and Kevin says he can’t read maps. There’s an immediate debate about whether we should turn right to the traffic lights by Sainsbury’s or turn left towards the Tasty Jerk.

Up through Grangewood Park (obviously now childishly renamed Grange Hill) and towards the TV masts of Crystal Palace. Bubble 22 passed us outside the former home of Palace fan and Champions League Composer Tony Britten. Smirking as they strode by, JC let them know that the only member of their bubble who had actually played in Europe was Eddie Izzard!

Past Crystal Palace station and into the World Cup Champions of South London Parks winner 2020 (not Brockwell Park!). The home of Crystal Palace FC until 1915 and the venue of early FA Cup finals lay before us. More triv from JC, who said this was where he saw his first Palace match in 1968 – no one else knew we had played the World Cup-winning West Ham there. (We lost 4-2).

The Crystal Palace Concert Bowl where Kevin saw Bob Marley and JC saw inflatable dinosaurs at Rick Wakeman’s Journey to the Centre of the Earth.
The Dulwich Wood House and memories of bags of crisps with twisted blue bags of salt. John Logie Baird’s blue plaque. Then JC’s childhood home of the early 60s and the story of how he was taken to his first football match from there on 30 July 1966. (We won 4-2). 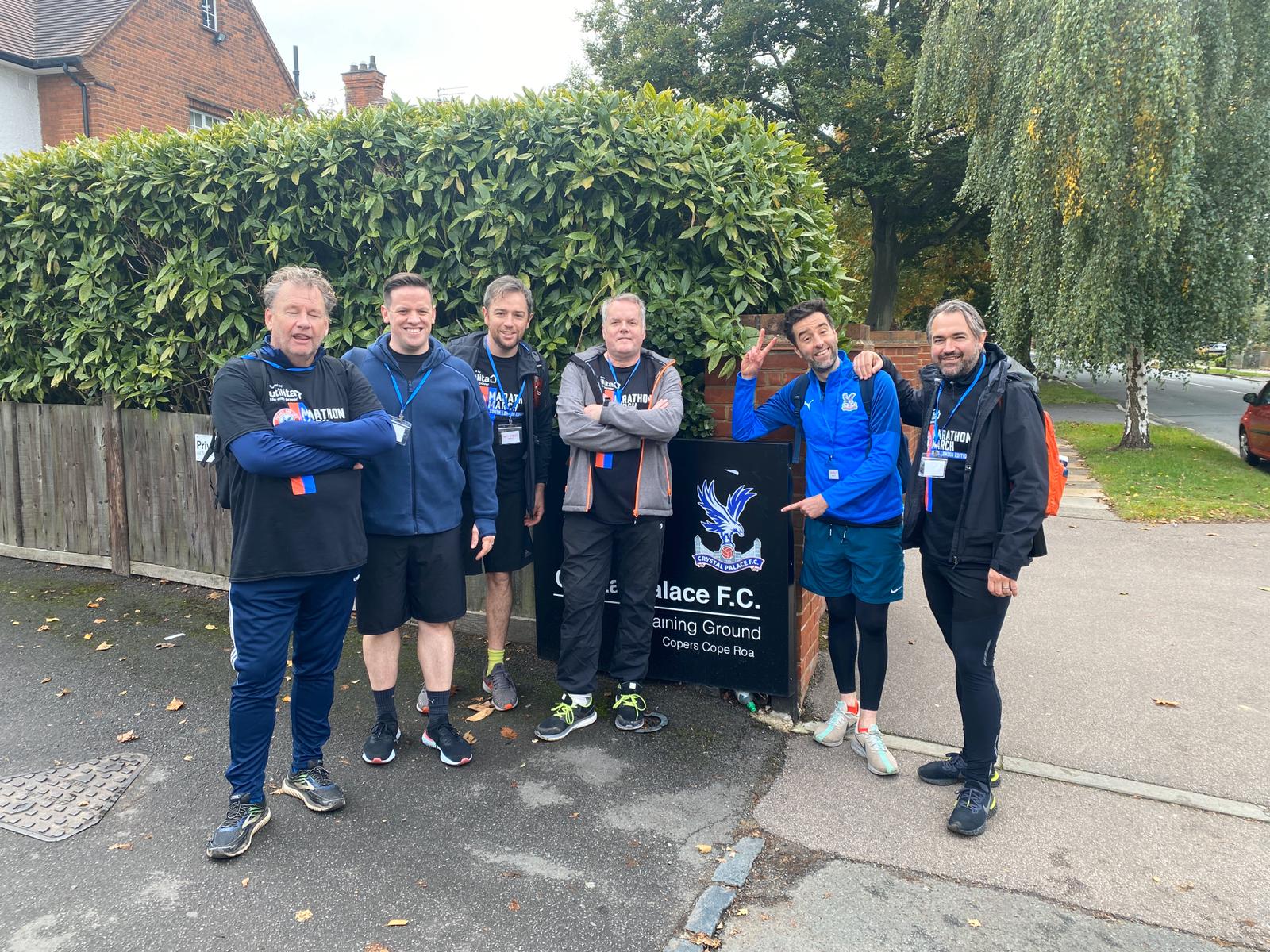 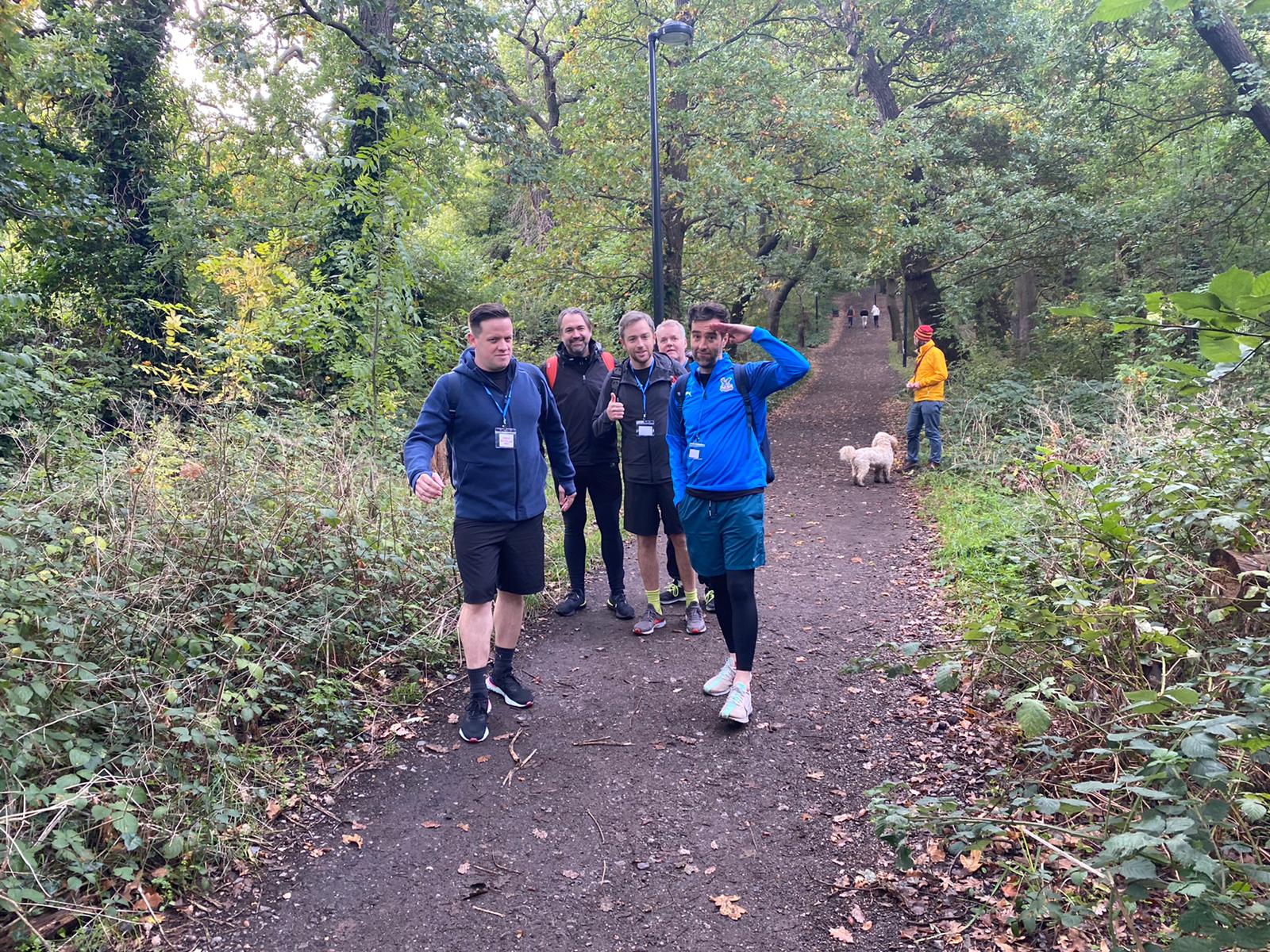 Downhill (phew!) through woodland paths, past disused train tunnels and underused golf courses. The instantly-recognisable, tall-spired churches of South London, all designed by Archibald Leitch apparently. Hence why they look the same! JD and Rob do the first of our mini-vids to our Patreons.

Our first stop – The Honor Oak Community Centre. There’s no one else here apart from us and the refreshments. Phones recharge while tea and coffee are drunk. The other bubbles have used all the milk – there’s only ALMOND milk left! Kevin pronounces Almond to rhyme with the 70s band who wrote the Top Gear theme tune. This and his insistence on saying ‘albeit’ to rhyme with Albert sparks a conversation about word-blindness.
JD and Kevin do another mini-vid to announce we’ve reached our target of £1,500. Woohoo!

Now you may think that Crystal Palace Park is the best park in South London. Think again! (No, Andy, NOT Brockwell Park). The stretch of green that is Ladywell Field through Pool River Linear Park is beautiful - and flat! Even better, the tennis courts were packed, the yoga classes were packed and the football training had youngsters proudly wearing Palace kit.

We approach Beckenham and see the new Academy building emerging. We notice that Copers Cope Road is incredibly posh with the kind of houses that only lawyers and footballers could aspire to. Quick photo opportunity by the entrance to the Palace training ground and we’re at the halfway stop, Kent County Cricket Ground.

Phones recharge. Non-almond, opaque, fatty, bovine mammary secretion is sought. Team refuels. Jesse and Andy do a mini-vid from the balcony with designer crisps in hand and the Palace training ground behind them. There’s talk of going for two grand! Somehow our navigator loses us again in Beckenham Place Park. To be fair, the arrows signing the route are camouflaged in a perfectly autumnal hue of orange and white.

JC and Streety test Kevin on “Who Are Ya?” and are treated to facts about Accrington Stanley. [“Who Are Ya?: 92 Football Clubs – and Why You Shouldn’t Support Them” by Kevin Day, published by Bloomsbury, foreword by Gary Lineker is available at all good book shops for £14.99 or cheaper. 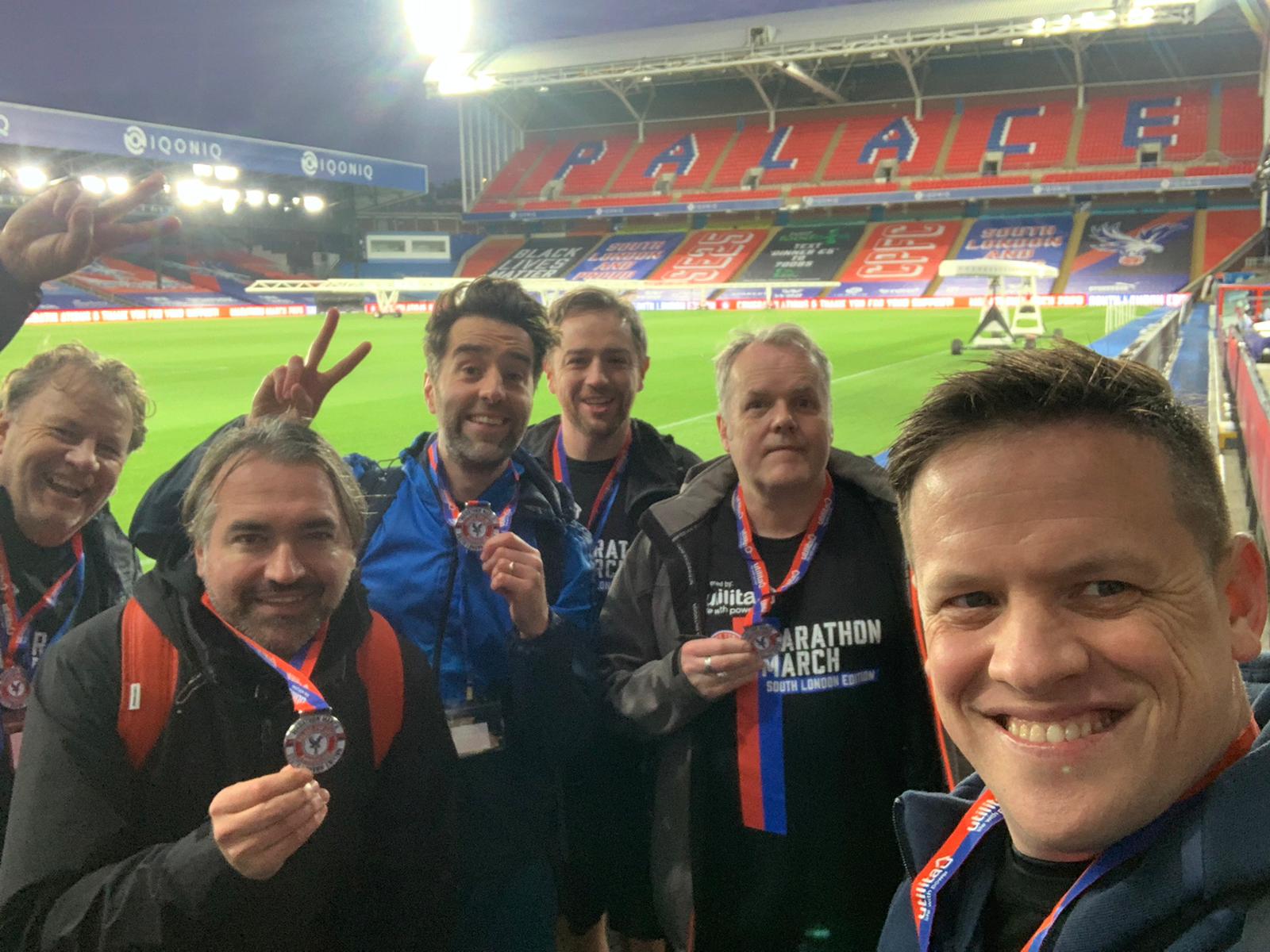 We decide we should organise a socially-distanced signing session in the Pawsons. Rob starts recording the Marathon March pod. Rob has a Rob Rant. It’s a cracker, a “nicely pitched rant” says JD. “Well played Rob!” While Kevin is being interviewed, JD - who is ahead of us - walks into a lamppost.

It’s uphill to Bromley – but we take a slightly different and of course steeper route! Masks on for Bromley High Street in case anyone recognises us and breaths contagion upon us. Before we know it, we’re at Bromley Football Club where it’s match day and the ground is open to spectators. We’re all unhappy that we can’t yet be allowed back to the open-air, easily socially-distanceable stadium in SE25.

Not before we’ve hurdled a few stiles and trekked across more fields. We look for the traffic lights and Belisha beacons (now renamed Bielsa beacons) to guide us safely across the mad mile. JC explains that when he played for Shirley Wanderers Rugby Club* (for that is where we are) the changing rooms and clubhouse were in Surrey and the pitches were over the road in Kent. No one cares. Jesse’s dad turns up to say a socially-distanced hello. (* Now called Croydon Rugby Club.)

More woodland and more hills. It starts raining, five of us don macs and hoods while JD produces an umbrella from nowhere. He looks like Mary Poppins! 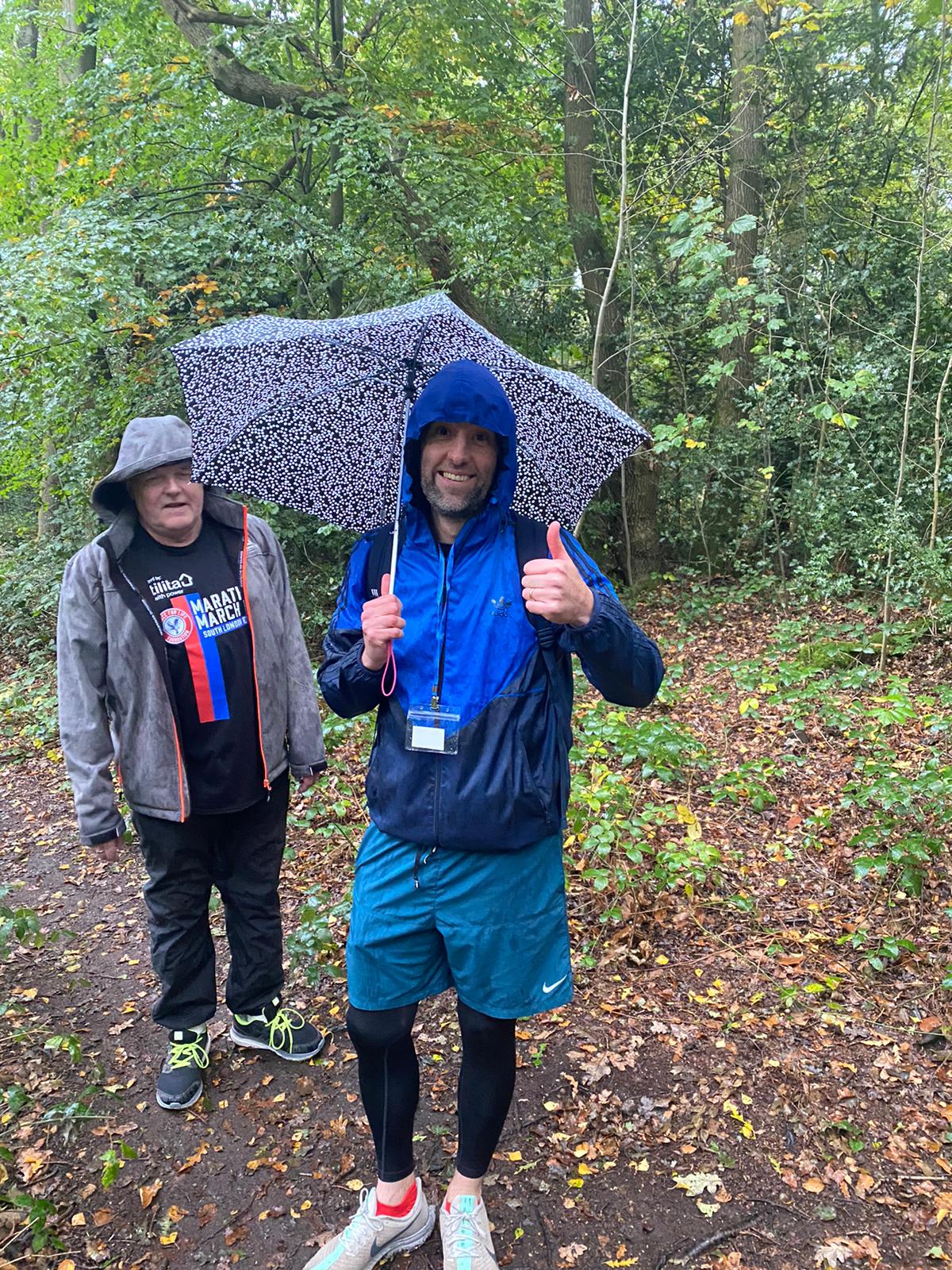 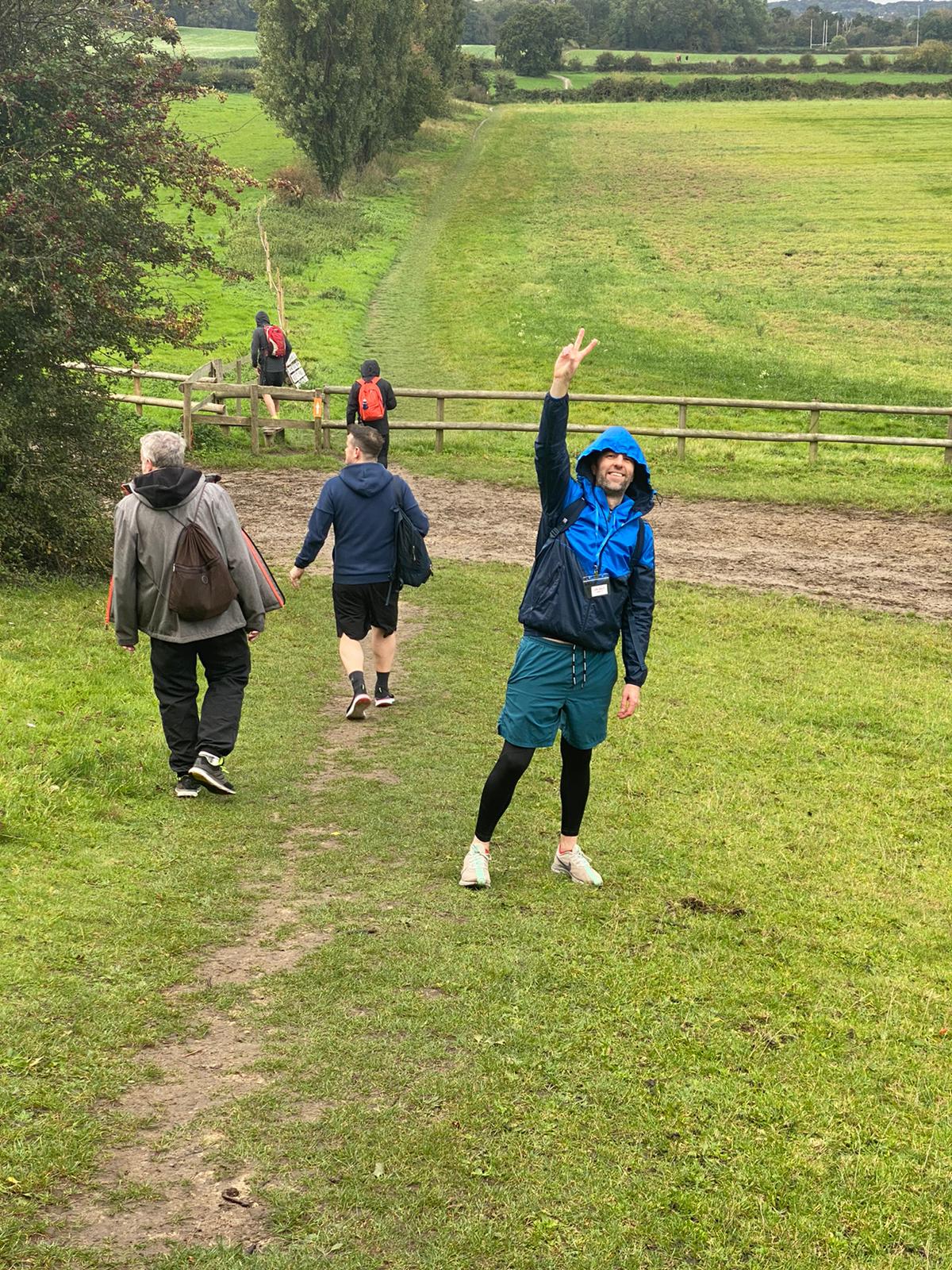 We need a drink. We’ve promised ourselves a shot of whisky at 20 miles. Passing Jesse’s alma mater we decide to head for the Sandrock by Shirley Hills. We won’t stay long: line the drinks up and knock them back. Disaster, the Sandrock is closed. Salvation, there’s an off-licence opposite. But no miniatures! Streety and Jesse negotiate a purchase of a bottle of Famous Grouse and six plastic cups. We head off into Shirley Hills. We get lost. Sellsy sends us a message with an individual performance analysis of each team member. That and the Grouse spur us on.

But, hurrah, it’s all downhill from here into Croydon. We cross the tram line a few times and find ourselves in Lloyd Park where the conversation turns to bomb craters and V2s. We temporarily lose Kevin who is succumbing to a blister.

East Croydon Boxpark tempts us but Streety, now confident he can navigate us safely back to Selhurst without getting lost, suddenly announces we have completed 26.2 miles. We’re in Sydenham Road!

But ten minutes later we’re turning into Holmesdale Road, the floodlights are on and the emotions are beginning to swell. It’s not that we’re overcome having completed 26.2 – technically 27.4 – miles, and we’ve successfully negotiated the South London Alps, more that we’re back home. Back at Selhurst, frustrated that we can’t come here to see our team play. The team that binds us together as mates, the team whose ups-and-downs over time is how we measure our lives, the team that is ultimately the reason we’re all here today.

You can still donate to our Palace For Life Marathon March pot here.