When Eagles Dare - The FYP Review There is a welcoming feeling when you rediscover a film or book you love. You find comfort in knowing the ending, joy in knowing what leads up to it, reassurance in knowing the characters and pleasure in witnessing their journey all over again.

When Eagles Dare is just that. It’s the story we know and love, re-told in painstaking and touching detail by the characters that made it such a compelling story in the first place.

For Crystal Palace fans, this is a director's cut that shines a light upon the elements supporters didn’t see. It adds colour to a tale we know so well, and answers questions that, for years, had been left either insufficiently answered or not answered at all. Why did Dougie Freedman leave? Why did Palace falter under Holloway? What did he do to rectify it? There are many chapters filled with the twists and turns we love.
As the documentary moves from the protest outside Lloyds Bank and the initial difficulty of Palace's first season post-administration, it touches upon the first major blip in the club's promotion-winning season, with the most striking of admissions coming from Dougie Freedman, who provides considered and heartfelt contrition around his departure from the club just as Palace found their winning groove. There are no excuses; there are many answers. It’s to Freedman’s credit that he is so open about his decision to leave the club for Bolton Wanderers in October 2013.
The strength of this five-part series comes not just from the personalities that were involved that season, but from the access provided to camera crews and by the openness to interviews from many of those involved at the time. Sean Webb and Chris Grierson have masterfully weaved footage and interviews together to create a compelling storyline that needed little narration — why have someone talk through the moments when those involved in them could do so in great detail themselves?

In doing so, the documentary draws on the unity of the team. You sense from each player interview that the side built a camaraderie that stood the test of the many challenges they faced, and even with time passed, you sense the deep level of respect and love that these teammates have for each other.
That unity also takes centre stage at a crucial point in the season as, following the appointment of Ian Holloway, the club's transition from a well-drilled side to a one which plays more expansively causes a significant drop in form which puts the club's promotion hopes at risk. 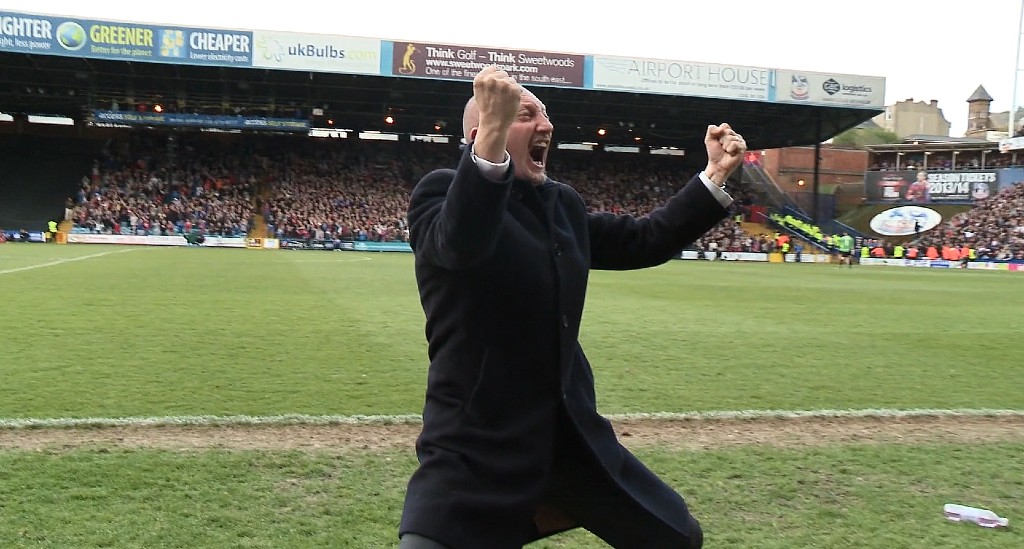 While many other football productions tend to brush over difficult moments with cut-scenes and musical montages, this documentary doesn't hold any punches. The players, manager and owners are all clear about what happened to rectify the situation -- some might consider it an act of mutiny by the players -- yet in doing so it underlines the documentary's honesty. There is no PR speak here.
The discussion around the meeting that followed the Birmingham City defeat, in which Parish and Holloway talk of what they need to do to get into the play-offs, is revealing. It shows a willingness from the manager to adapt, the honesty to admit that what had been implemented before wasn't working, and acceptance that the players needed to revert to what they knew. It's refreshingly blunt and the kind of rawness that adds meat to the bones of a documentary like this.

That strength and character of the squad made this a special team; it was not a side made up of multi-million signings but of a combination of weathered and brow-beaten stalwarts wanting one more opportunity to show their worth, mentally strong and powerful individuals who formed the spine upon which the club’s success was built, and young, exuberant and fearless attacking players unaffected by the dampening effect of experience. 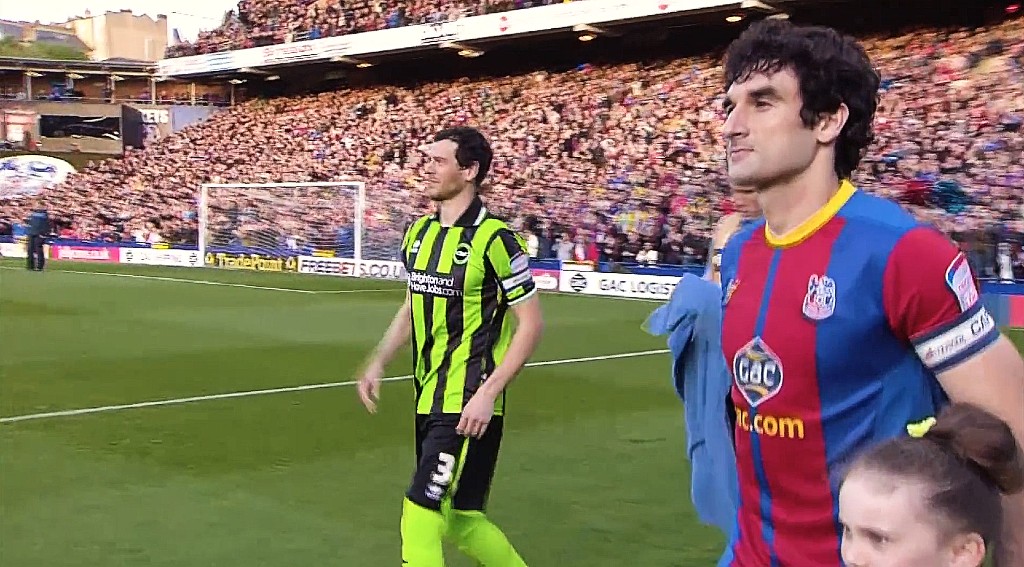 Two players feature in the documentary who really make the case perfectly. Damien Delaney, a centre-back discarded by Ipswich Town, ready to step away from the game only to sign a 3-month contract at Palace and Yannick Bolasie, a £500,000 signing from a Bristol City team who were only too happy to let him go.

At Palace, they found a caring and loving home. Not only did they write new chapters in their stories, but neither allowed the challenges of their past to dictate the outcome of their future. They are, like many before them, Palace success stories and this documentary helps to celebrate their achievements. They bought into the ethos of the side and became crucial to the story of the club.

Much of the focus of the documentary is on the playoff matches against Brighton & Hove Albion, with an entire episode dedicated to the event, and it does a fantastic job of contextualising the importance of these two games. This isn't just a playoff between two teams, it's a fight between two rivals. Palace are the lucky but quietly confident protagonists of the piece, facing up to their arrogant and cocky opponents.
The first game is the appetiser; you get a feel for the enormity, tension, and gritty nature of the game. It covers the awful injury suffered by Glenn Murray, and the fortuitous way in which the club scraped a 0-0 draw. But as Parish paraphrases Holloway, 'You just need to get through the first leg without losing. The next game is a cup final and it doesn't matter where it's held.' Holloway was right. Palace needed to just get through the first leg.
The second leg is given the prominence it truly deserves. If you look back at clutch moments in Palace's timeline, this was one of them. Palace shifted gears that night and, in doing so, propelled themselves towards the Premier League. The documentary covers 'Poogate' and the impact it had on the club's preparations prior to the game, and then gets to the heart of the matter as Palace and Brighton fight for the right to get to the final.
You see key moments. Julian Speroni's save from Ashley Barnes, Jonny Williams's miss and then Zaha's two majestic goals, the first a header and the second a wonderful shot into the top corner of Tomasz Kuszczak's goal. Both are portrayed in a patchwork of candidly-shot camera angles and television footage. Each moment is narrated by the players involved. It's a beautifully worked piece of documentary-making that excites and enthrals in equal measure. The final episode is dedicated to the Playoff Final against Watford at Wembley. A great deal of emphasis is put on Holloway's experience as a manager in this situation, having previously guided Blackpool to promotion to the Premier League. That knowledge was key to Palace's preparations, it turns out, as the manager took the players to Wembley the day before the game -- immediately after the Champions League Final had been played there -- to allow them to acclimatise to their surroundings.
"Ollie did things like that, and he was brilliant in the playoffs," says Delaney in the documentary.
The 90 minutes of the game itself are somewhat forgettable, with neither side really taking a dominant role in the match. The documentary touches upon the misses of Aaron Wilbraham and the brilliant saves of Speroni, as well as the battling spirit of Delaney and Jedinak.
And then it shifts once more, to the third and final act of Zaha's playoff brilliance, as he draws a foul from Marco Cassetti in the penalty area. Holloway stresses that Palace targeted the player repeatedly, and after 105 minutes of exposure to the winger's trickery and pace, Cassetti finally took the bait. Kevin Phillips talks through how he took the ball to take the penalty. How there had been a challenge from Andre Moritz to take it. But the players knew what he Phillips could do. And he did it.
There is still tension, as there always is when Palace lead. Watford's desperate attempts to equalise were epitomised by the Fernando Forestieri shot headed away by Joel Ward late in extra time. What followed was the final whistle, and the elated release of emotion from players who'd experienced the many ups and downs of the most chaotic of Palace seasons. The footage cuts from the joy of players to the joy of fans, and back again. At the time, this felt like the highest of highs Palace fans could appreciate. But eight years of Premier League football since, there's no doubt that this was a season that changed the course of the club entirely. Much of the final chapter focuses on Delaney's emotional reaction at the end of the game, and it can't be stressed enough that Delaney's story is Palace's story.
Delaney went from being on the brink of ending his career and joined a Palace side that had just stepped away from their own point of football extinction. And as Delaney grew into a Palace player, so the club grew into a promotion contender. As Delaney established himself as a Premier League defender -- amassing 130 Premier League appearances -- so Palace established themselves as a Premier League club. Delaney puts it down to fate. Palace were blessed by the same fate.
Responses to Amazon Prime promoting the documentary have seen many fans of other clubs ask why such an inconsequential story might be shown by a service like theirs. However, When Eagles Dare is the kind of story that makes football what it is. It's not just about public relations puff-pieces for billionaire-funded clubs. It's about stories that we have all experienced at some point in our lives. About the ups and downs that we have all enjoyed and endured. It's about persistence, and perseverence, even as others write you off. Football isn't just about super clubs and legacy fans, it is for clubs like Palace, and fans like Palace's.
This documentary is a love letter. Not just to the Palace team of 2012/2013, but to the people and the moments that make these stories so compelling. To the fans, the players and the club that sits at the heart of a South London community. Our community. Our Palace.
Tweet
back to top
Tweet
Crystal Palace FC , Crystal Palace , Palace , Eagles , Julian Speroni , Zaha , Wilf , Wilfried Zaha