One More Point was the fanzine that inspired FYP and now its creator, Cris Lehmann, has written a book about the scrapes and adventures of making and selling a Crystal Palace fanzine in the early 90s. We'll let him explain... 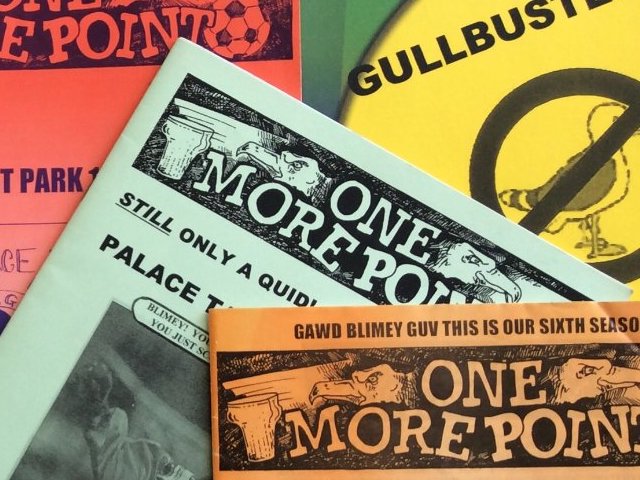 When I finished wrting One More Point in 2003, it was the right time to end it. It had had a great ten year run with 60 issues produced and, as a guy who likes even numbers, it just felt like 60 was a good total to end on and I just needed a break. The plan was always to write a book. There were various things that never got said due to timings with issues, most notably the tumultuous period between Issue 9 (April 1995) and Issue 10 (August 1995). Sometimes great stories got missed.

Plus there was always the stuff that most folks were unaware of - the actual producing of a fanzine and all the side stories and issues that came with the territory. There was no internet to download player pics whenever you wanted one - if you wanted a picture of Dean Gordon or Chris Armstrong, you needed to make sure you had your scissors to hand and cut them out of the Advertiser or whichever paper had a decent (ideally clear) photo. You wanted a logo? You'd better know someone who was good with a felt tip pen...unless you were One More Point with the very unusual way that mag created its first logo (see Chapter 5 for the tale of how Spurs and St Mirren helped a Palace fanzine get its name and logo)!

For various reasons, other than the most rare fanzine of them all - the limited edition, 150 copies of Eagle Aye that I made for Sheffield United away in 2004 - that break from writing about Palace just grew and grew.

That said, by leaving a large gap, the nature of the book has a different complexion than if it had been written in 2005. It's scary to think that people aged 30 won't even remember OMP - that makes me feel really old. That's partly why I make references to the way things have changed. Younger folk I speak to have no experience of the promoted teams coming up and making a run at the title straight away - Chelsea, Forest, Newcastle, Leeds, Blackburn and even Sheffield Wednesday all flourished straight after promotion between 1989-95.

Wolves qualifying for the Europa League last year was decent but was deemed something out of the ordinary - in the early 90s it was pretty much guaranteed one team would be finishing in the Top 3 or 4. Those days are now gone, which is a shame. That said, this book's not about slating modern football, but there to act as a memory jogger for fans aged 40+ and maybe something more educational/historical for younger folks wanting to learn about an era that's not so long ago but nevertheless where standing was still the preferred option for many fans, you could only get scores of other games via the half time scoreboard and you could just about get three pints for under a fiver (well, at an away game up north anyway, you'd need to go back to just before the OMP years for that to apply to SE25).

The book was initially planned back in 2015 to try and be the 'Fever Pitch' of fanzines but I reached a point after those early introductory chapters regarding the fanzine scene (especially Eagle Eye) where once the flow of the story begins with the day OMP started and that 1-0 win on a rainy v Sunderland, I knew this had to be a book that was 99% Palace - the other 1% involves references to Michael Jackson (yes, THAT one) ruining a night out for me, Richie Richardson (the West Indies cricketer) being converted to Palace, and even Pingu makes a brief appearance. I admit, this isn't your usual football fan book! 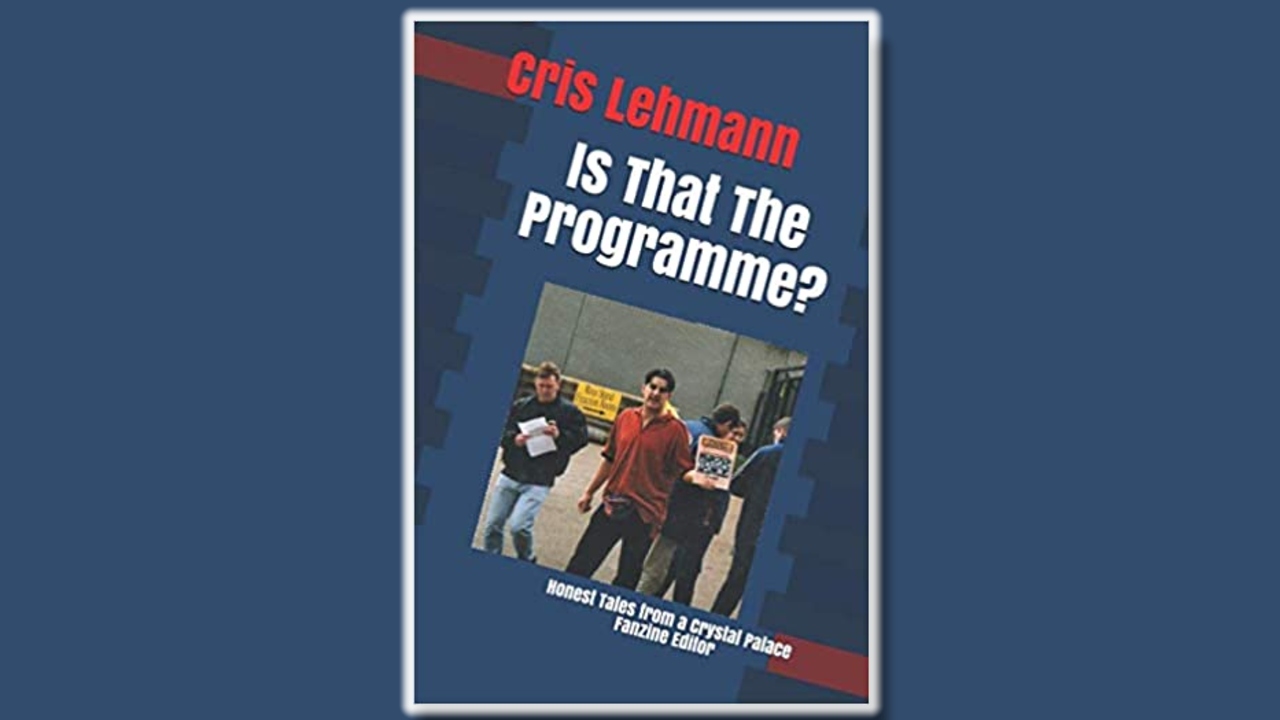 This isn't just the OMP story but very much the 'Crystal Palace story' for the mid-nineties from on the pitch dramas (of which there were plenty), to off the pitch strife (of which there was plenty) and, of course what was going on in the pages of One More Point with a healthy helping of Eagle Eye, Eastern Eagles and then Palace Echo which took over the gap left by Eagle Eye.

It's also an accurate account of what went in those years. The Cantona kung fu kick has been written about so many times over the years and yet when I researched the newspapers and tape recordings (yes, I still have old school cassettes) I still have from that week and rewatched the match, there are a lot of things that have been glossed over or remembered/ reported incorrectly. What was being printed and written the day after that night was very different to what was being written even just a couple of days later. I was surprised by a couple of things myself about the night and how its easy to form an incorrect version of events.

Yes, this book is biased towards Palace (hey, we are the greatest team the world has ever seen after all) but it tells it like it was back. Palace beat Grimsby 5-0 once and got outsung by 10 Grimsby fans for large parts of the second half. With the stability under Steve Parish in modern times, it's easy to forget that there was a lot of unrest around 1995-96 and people shouting 'Noades Out'. It was a real 50/50 split back amongst supporters back then. There is an amazing exchange with Uncle Ron near the end of the book where he fronted up to supporters who were giving it 'Noades Out' when they had no clue he was in earshot. Most folks won't even know that story - it's a pretty good couple of pages even if I say so myself.

For five years the working title of the book was 'Is That The Programme?' but the intention was to get a 'proper' name once the book neared completion. The thing was, when I spoke to OMP's old sellers or other fanzine editors (including other clubs, not just Palace) they all said my 'draft' title was in fact the perfect title for the book. No matter how many times I bellowed 'One More Point, one paaaahhhhnd your Palace fanzine!' I'd still get 10-20 people every single game asking 'Is That The Programme?' despite being stood barely ten yards from Sideburns in his orange vest and a programme stand in front of him. 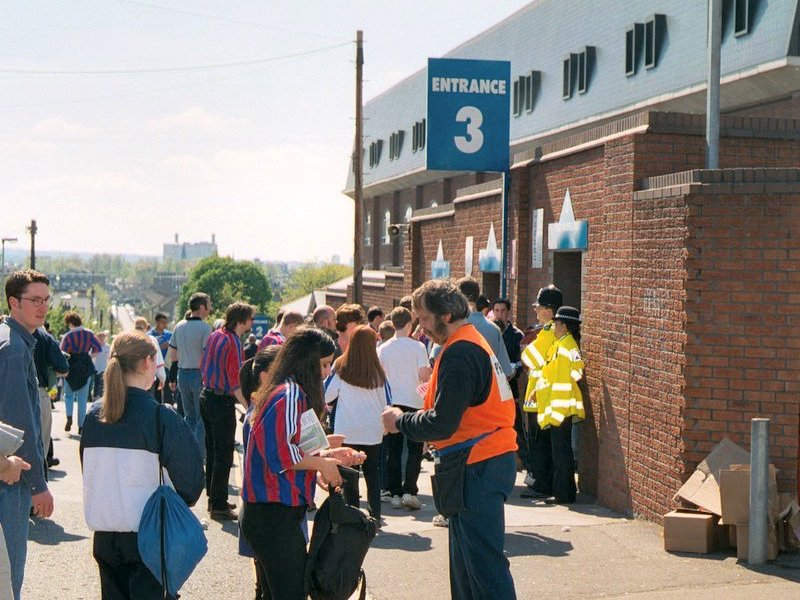 Finally, I got lucky with the cover picture. I was wondering what I could do for the cover - it's not like old days when I could just glue a joke on the cover - things have moved on in that respect! I didn't know Paul Wright had taken that one (although I remember he took a lot of fan photos back in those days) but was very grateful when that came into my possession The day that was taken was Watford away in 1999 and I was selling the rather blunt 'Goldberg Out' issue....which was just a little bit awkward when I was shouting '£1 your Goldberg Out Edition' just as Mark Goldberg himself walked sheepishly up to the ground with his wife and daughter. (Out of respect I did shut up for a minute given his daughter was there - it was nothing personal but the guy was killing our club)!

It wasn't the last time we met at close quarters either - a week later I was dressed as The Grim Reaper leading 2000 Palace fans in a protest march to hand him a petition of over 5000 fans' signatures demanding he resign as Chairman before Palace were sunk without trace. But you'll have to wait for the second book for that particular story.

Is That The Programme?: Honest Tales From a Crystal Palace Fanzine Editor is available at Amazon in Kindle (£4.99) and papaerback (£9.99) versions now.